How to Play 8-Ball Pool: Rules of the Game 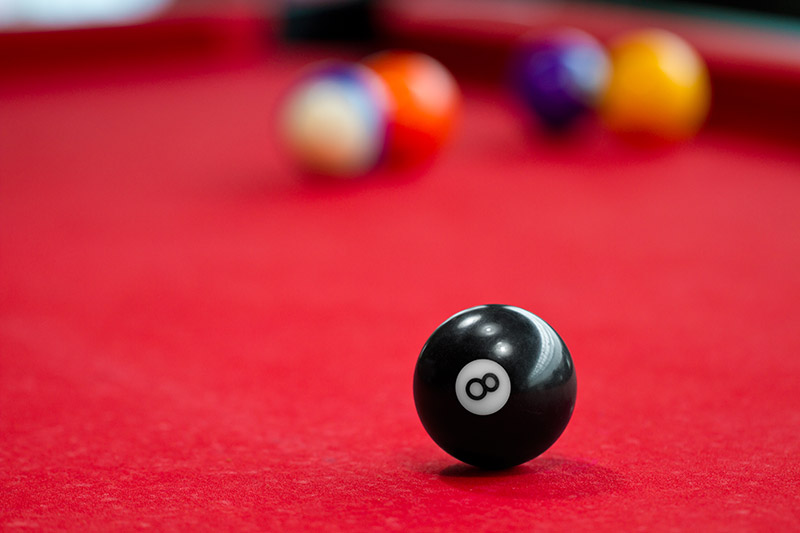 8-ball is the most popular variation of pool and favorite form of entertainment for many people. Are you interested in playing 8-ball but you don’t understand exactly how it works? Then fret, no more. You’re in the right spot. This guide will completely explain the game so you’ll know how to play 8-ball after reading this article.

The name of the game can be a little confusion at first. Contrary to what you might think, 8-ball is not played 8-balls. There are actually 15 numbered balls plus a cue ball (the white ball). In order to win, you’ll need to know 7 stripes or solids into the pocket, followed by the 8-ball. Don’t worry, we’ll cover all the details.

8-ball pool game demands dedication and time to master. But that doesn’t mean it’s not enjoyable for beginners.

To get started with the game of 8-ball, there are some general rules that you need to observe:

How to Play 8-Ball: Basic Concepts

8-ball pool is a call shot game played with a cue ball and 15 numbered balls. A player needs to pocket balls with the numbers 1 to 7 (solid-coloured) balls. Or balls from 9 to 15, known as stripes.

Now you might be wondering, how does one win a game? Pocket all the appropriate and required numbered balls, followed by the 8-ball, and the game is yours! Let’s dig deeper into the nitty-gritty details of this exciting yet challenging game. 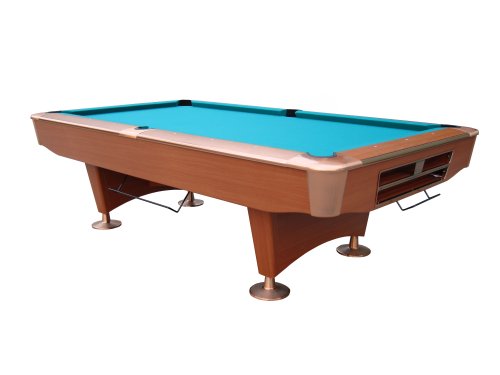 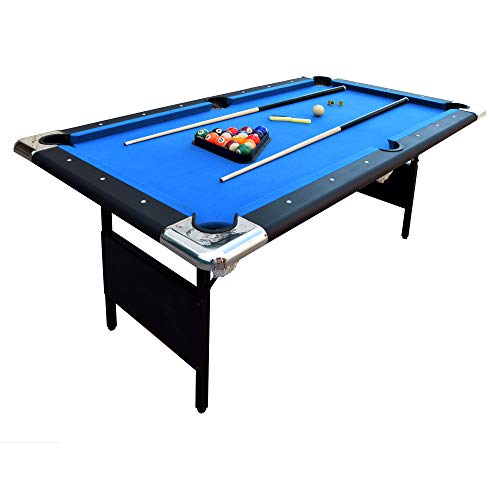 Did you place a breathtaking break shot, but the spread didn’t happen your way? It might be because of a loose rack (learn how to rack pool balls here). But, making a solid shot is not a cumbersome task. Here are some ways you can get a productive spread and positive results.

There is no hard and fast rule for aligning the balls in the rack. The arrangement is what matters the most. Place the 15 balls inside the rack appropriately, leaving alone the cue ball in the middle of the table. The first ball in the triangle rack is supposed to face the end of the break. Simultaneously, the solid and striped balls are required to place at the corners of the other 2 ends. 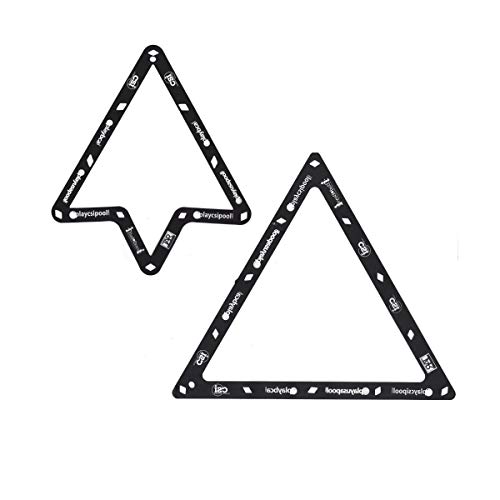 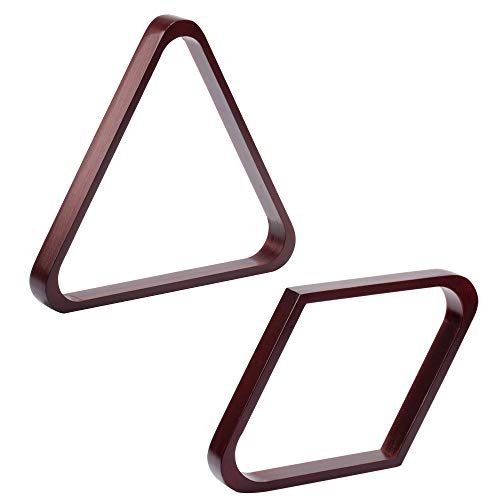 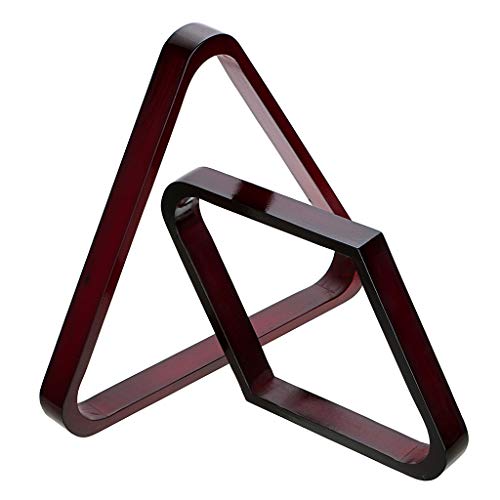 So, now you’re aware of the basics of the game and how to start it. The second important step is to find the head spot. What’s the head spot? It is a spot which is located the quarter way down to the table. At that point, you’ll place your cue ball and initiate your shot.

As you progress towards the first or second step of the game, you might hear some unusual terms that you’re not familiar with. To get to know more about 8-ball pool, one must learn these terms.

A novice might not learn everything the first time, and it takes time to get accustomed to these terminologies. That’s why this page is available! Come back as often as you need until you have mastered the terms of the game.

Pocket: This is one of the most used and important terms if you ever want to play. You’ll see 6 pocket holes on the table at each corner and along the midpoint of the longer sides.

Rack: A rack is a triangle object, which is used to arrange the balls properly and initiate the game. A diamond rack is another type in addition to the triangle rack, but you’ll use the triangle for 8-ball.

Foul or penalty: A foul or penalty favors your opponent by providing him an opportunity to take or aim the next shot from any desired position with the cue ball, anywhere on the table.

Open Table: When the object balls are not yet targeted or sunk by both parties, it is referred to as “Open Table.” This term is applicable at the beginning of the game.

Break shot: Whenever you hear the word break while playing an 8-ball pool game, it means the game has started with the first shot of the game.

Carom Shot: This might be a new term for you. The carom shot is applied when the cue ball rebounds the corresponding ball, resulting in a pocket. This shot is called a carom shot.

Clean the table: Cleaning the table is often used for professionals. It applies when a player consistently sinks the balls one after another. As a result, they win the game. So, we call this winning moment, “running the table”.

Bank Shot: Bank shot is a type of shot that involves your entire effort in moving a particular ball to the ideally desired direction or pocket.

Rail: We also refer to rail as a cushion. It is a bank alongside the tabletop, where balls bounce back, once they are in motion, hit by a cue or any other ball.

So, now you’re familiar with the lingos used during the game. Next, it’s the right time to learn how to play an 8-ball pool game. Without further ado, let’s dive in.

Table could not be displayed.

Placing Balls On the Table

Decide Who Will Take the First Shot

Usually, a coin toss is done to decide which player will make the first break.

Next, a legal break is made. In this break, at least four object balls must touch the cushions. If on break the 8-ball is pocketed, then a re-rack is required.

Who Plays the Next Shot?

Now the player is supposed to continue hitting the balls until he fouls or fails to pocket a ball. This means that if the first player successfully pockets an object ball, he will have another chance. The player has the option to pocket as many balls as he can consecutively. This demands skills and practice. The chances to win the game increase if you can pocket the balls right after the break. This puts pressure on the opponent as he or she waits for a turn.

See our reviews of the:

How to Win the Game

This game can be won in three ways:

In the latter two cases, you automatically win the game.

Rules of the Game

Any game is meant to have specific rules and regulations to be followed by the players. 8-ball pool is no different. The game has many rules, some strict and some optional, which makes this game more exciting and fun. The real essence of the challenge lies in the fact that everyone has to compete while keeping certain limitations in mind.

There are many variations of these rules that are practiced around the world. But the World Pool-Billiard Association (WAP) has developed some standard rules which you must be aware of before starting the game.

This game has established rules regarding fouls as well. So, let’s look at how you can commit a foul and what the penalties are

Other than these fouls, a ‘foul penalty call’ can be made based on the following fouls committed by the player. The penalty for these is that the opponent gets to have the ball in hand, and he can place it anywhere on the table, not just the head region.

There are two other variations of the 8-ball pool that are played in different parts of the world. The gameplay is almost similar to the original version but has slight differences in rules. Let’s have a quick look at two of 8-ball’s variations and how they differ.

This is the British version of 8-ball pool, which is mostly played in Britain, Ireland, and Australia. The game has similar rules except that the game involves only solid-colored, unnumbered balls with an 8-ball. Another difference is that in racking, the 8-ball is placed at the apex spot rather than the center.

This game is a mixture of regular 8-ball and rotation. The rule is to pocket the balls in numerical order. The 8-ball is left for the last, just like in the actual 8-ball game. Usually, the solid colored set is pocketed in ascending order, i.e., from 1-7. On the contrary, the striped balls are pockets in descending order, i.e., 15-9.

8-ball pool has many sets of standards regarding fouls and instructions. It is a must to understand the rules and the process of gameplay to triumph in billiards. Now that you know every step and every rule, you can go ahead and play the game like a pro with your friends. Don’t forget to keep in mind the ways you can commit the foul. Keep it fair and square. Happy pocketing!

The Best Dart Mats to Protect Your Floor