Darts 101: How to Play, Games and Rules, and Proper Technique 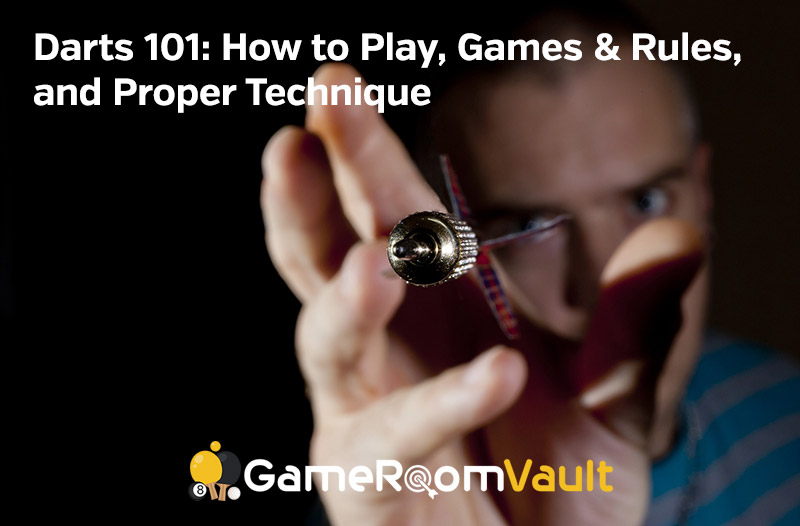 Not many games are as versatile as darts. You can play by yourself, with a friend, with several friends, or with a large group of teams. You can play at home, inside or outside, at a bar, or even a break room at work. There are many different games that you can play, and multiple variations of those games.

A dartboard is a great addition to your home gameroom. Your family will enjoy it, and it’s great for entertaining.

This article covers all the basics of darts: what you need to play, basics of the game, different games that you can play, how to throw darts correctly, as well as safety precautions.

What You Need to Play

There are different types of dartboards, but the standard dartboard is 18 inches in diameter and has 20 numbered sections shaped like pieces of pie. There is a double ring on the outside and a triple ring further inside. The bullseye is in the center. There is an outer bull and an inner bull. The inner bull is worth 50 points and the outer bull worth 25 points. This type of dartboard is sometimes called a “clock” dartboard. The 20 section is at the top and the board should be flush against the wall. Optionally, you can have a scoreboard on the wall as well. Most electronic dartboards have an LCD scoreboard display. See our recommendations for the best dartboards (bristle and electronic), best darts (steel tipped and soft tipped), best dart flights, best dart cases, best electronic dart scoreboards, and best dartboard surrounds. 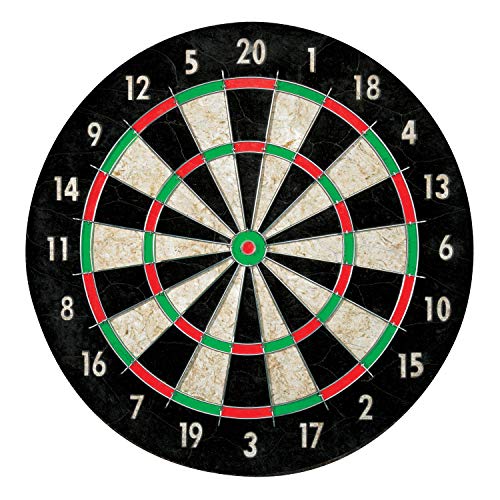 There are a lot of different games and ways to play, and even different dartboards.

The board should be hung so the bullseye is 5 feet and 8 inches from the ground, according to the Professional Darts Corporation.

If playing with steel-tip darts, the toeline or throwing line is 7 feet and 9.25 inches from the dartboard (this distance is referred to as the oche), according to the National Dart Association. If playing with soft-tipped darts, the toeline is 8 feet from the dartboard. You can mark the line on the floor with tape, paint, or chalk. Some tournaments use a small wooden board that sticks up from the ground as the throwing line. 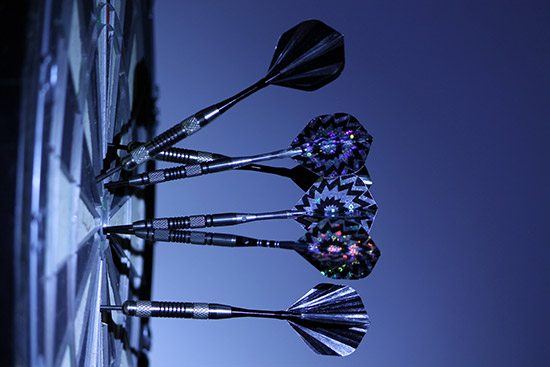 There are many different games that you can play. Here is a summary of the rules for several popular games.

Player of team starts with 501 points (can also be played with 301 points). You win by being the first to reach zero. This game can be played by two or more players or teams. A player or team throws 3 darts, and the scores from those throws are subtracted from 501 until the player or team reaches 0.

You must throw a double to hit zero. For example, if you have 40 points remaining you must hit a double 20 to win the game.

This can be played as a single game, or as a “best of” series. For example, best of 5 (first player or team to win 3 games will win the series).

An optional rule, is that the players must start and end the scoring with a double. Under this rule, at the beginning of the game no points are awarded until the player throws a double.

There are either two players of two teams. Only numbers 15 – 20 and the bullseye are in play. Each player or teams takes turns throwing three darts in succession. The throwing of three darts is referred to as an inning or a turn. The player of team must score three of a particular number in order to close the inning. This can be done with three singles of the number, a single and a double of the number, or a triple of the number.

Baseball can be played by two or more players or teams. There are nine innings, and each player or team will get a turn to throw three darts in the inning. Only numbers 1 – 9 are in play, and only one number per inning. In the first inning, only the number one is in play. In the second inning, only the number two is in play, and so on. Scoring is the same for each inning, regardless of which number is in play. A single is worth one point. A double is worth two points. And a triple is worth three points.

At the end of the seven rounds or innings, the player or team with the most points wins the game. The other way to win is by scoring a Shanghai. A Shanghai is when you get a single, double, and triple of the number in play with your three darts. If any player or team gets a Shanghai, the game is over and that player or team wins.

This game is played by two or more players or teams. Each player or team throws three darts in succession. In order to win you must be the first player or team to hit each number, 1 – 20. You can hit a single, double, or triple, but you cannot move on until you have hit each number in order. For example, you must hit one first, then attempt to hit two, and so on.

20 to 1 is a variation of Around the World. In 20 to 1 there can be two or more players or teams, and each player or team throws three darts in succession. You must hit each number is succession, starting with 20 and going down. After going all the way down to 1, the player must get a bullseye (outer or inner) to win.

Legs can be played with two or more players or teams. All numbers on the board are in play, with singles, doubles, and triples being used for scoring. Each player starts with three legs. One player or team starts by throwing three darts in succession, scoring as many points as possible. The next player must score more points that the previous player or lose a leg. The last player with a leg remaining is the winner.

This game can be played by two or more players or teams. All numbers on the dartboard are in play. Singles, doubles, triples, and bullseyes are used for scoring. Each player throws three darts in succession.  In order to keep any points from your round, the total number of points earned in that round must be divisible by 5. For example, if you had a single 5 and a double 10, that would equal 25 points earned. Twenty five divided by five equals five, so you would score a five for that round. If your score from the round is not divisible by five, you keep no points from that round.

The game goes on until one player or team reaches 51. But in order to win, the player or team must score all three darts in the final round (so if you have a number divisible by five after two darts, you can’t miss the board entirely on your third dart).

How to Throw Darts

There are a lot of different styles and techniques for throwing darts. Let’s take a look at the basics of grip, stance, and throwing motion.

How to Grip or Hold the Dart

The first aspect of properly throwing a dart involves your grip. While there are different techniques, what is most important is that you grip or hold the dart in a way that is comfortable and natural for you. There is no right or wrong way to hold the dart. 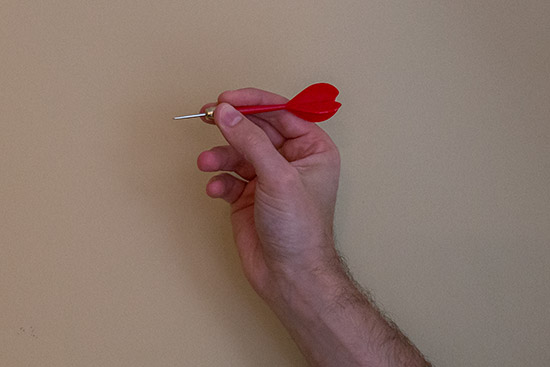 The correct stance is also important.

If you throw left handed, this would be reversed. Your left foot would be forward and your right foot in the back. 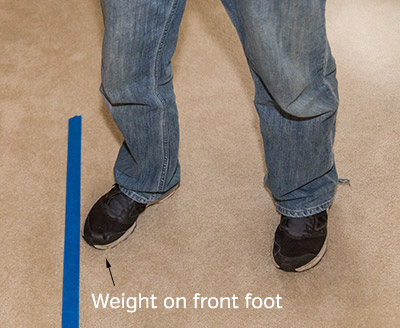 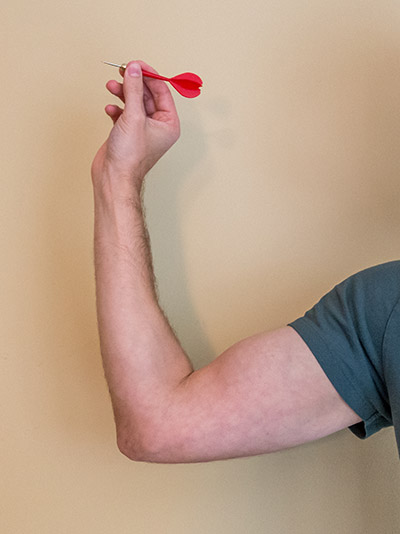 Starting position before the throwing motion 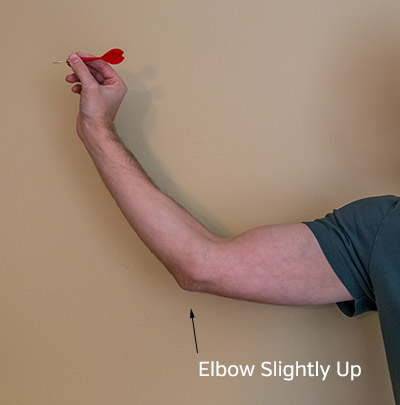 Extending to throw the dart

This video may be helpful.

Never place  the dartboard where people will be walking between the throwing line and the dartboard. Don’t place the dartboard near windows or other breakable objects. Darts can bounce off of the dartboard or the wall behind it, so keep participants and observers back to avoid being hit.

Most of all, make sure that you have fun and enjoy the game with your family and friends.